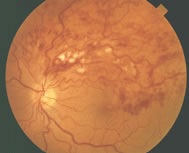 A branch retinal vein occlusion is essentially a blockage of the portion of the circulation that drains the retina of blood. The arteries deliver blood to the retina. The red blood cells and plasma then course through the capillaries and eventually into the venous system, beginning with small veins and ending with larger ones, and eventually reaching the central retinal vein. With blockage of any vein, there is back–up pressure in the capillaries, which leads to hemorrhages and also to leakage of fluid and other constituents of blood. Usually, the occlusion occurs at a site where an artery and vein cross.

Branch retinal vein occlusions are by far the most common cause of retinal vascular occlusive disease. Males and females are affected equally. Most occlusions occur after age 50, although younger patients are sometimes seen with this disorder (in this age group it is often called papillophlebitis). The highest rate of occurrence is in individuals in their 60s and 70s. The risk factors for this disorder are similar to those for vascular occlusive disease elsewhere in the body such as stroke and coronary artery disease. Specifically, aging, high blood pressure, diabetes, and smoking are all risk factors. Glaucoma has also been identified as a risk factor in some studies. There are less common conditions which may put a patient at risk for developing a vein occlusion including blood clotting abnormalities such as hyperhomocysteinemia, activated protein C resistance (Factor V Leiden), protein C and S deficiency, anti–phospholipid antibodies and diseases which cause sludging of the circulation or so-called hyperviscosity. Inflammatory and infectious conditions which cause vasculitis such as sarcoidosis and tuberculosis are also risk factors for vein occlusion. In general, unless there is a reason to suspect these less common conditions (such as young age, history of previous thrombophilia, or history suggestive of inflammation or infection), exhaustive laboratory testing is usually not indicated. Most patients are referred to their internist for the appropriate medical evaluations.

The diagnosis of a retinal branch vein occlusion poses little difficulty to an ophthalmologist who will detect dilated blood vessels, hemorrhages, and swelling (edema) in the distribution of the vein. It appears that the more complete the blockage, the more intense the hemorrhages and the edema. In fact, the blockage may be so dramatic that the involved capillaries cease to function and close off (ischemia or capillary non–perfusion). About 10% of patients suffering from a branch vein occlusion will experience a branch or a central vein occlusion in the fellow eye in the future.

When the distribution of the vein involves the center of the retina (macula), bleeding and exudation or leakage occurs there, producing symptoms. Leakage in the macula causes macular edema in which a patient will have blurred vision and loss of portions of the field of vision (corresponding to the distribution of the obstructed vein). Basically, the edema damages the architecture of the retina, causing these symptoms. These visual changes can be monitored with an Amsler grid. A fluorescein angiogram and OCT may be useful in evaluating macular edema and determining whether treatments with laser or pharmacological therapies are necessary (see below).

In the first three to six months after the occurrence of the branch vein occlusion, there is often significant intraretinal hemorrhage that involves the macula, making it difficult to predict the clinical course and visual outcome. After the first few months, it may be useful to do a fluorescein angiogram and OCT. Fluorescein angiography is helpful in analyzing the retinal circulation, particularly the capillaries which may manifest abnormalities such as leakage or macular ischemia (non–perfusion: closure of blood vessels which supply the retina with oxygen and other nutrients). OCT is useful for detecting retinal swelling (edema).

If the fluorescein angiogram indicates that capillary non–perfusion is the cause of the vision loss, it is unlikely that the vision will improve significantly over time. However, if the poor vision is due to edema or swelling, laser photocoagulation or pharmacological therapies, such as steroids or anti–vasogenic drugs (eg. Avastin), may be useful in sealing leaking capillaries to enhance the resolution of the edema for stabilization and improvement of the vision. Intraocular steroids, which are commonly used as a treatment for macular edema, increase the chance of cataract formation and elevation of intraocular pressure (steroid-induced glaucoma).

Sometimes in venous occlusive disease, scar tissue can form on the surface of the retina. This condition, which is called a macular pucker or an epiretinal membrane may result in distorted vision (metamorphopsia) which is not improved with laser or pharmacologic treatment. Vitrectomy surgery may be indicated for the removal of a macular pucker.

Laser photocoagulation treatment is a proven therapy for neovascularization in vein occlusions. Indeed, laser treatment can cause stabilization or, at times, regression of the vascular growth. This treatment, while important in helping to prevent further visual loss, is not usually associated with improvement in vision. As vein occlusions evolve, some normal vessels may dilate to compensate for the obstructed vein. Sometimes, these collateral vessels may be difficult to distinguish from neovascularization on clinical examination. A fluorescein angiogram may be useful in this determination.

Recently, the intraocular injection of anti–vasogenic drugs, that tell blood vessels to stop growing, has shown promising results in the control of retinal neovascularization. These treatments have not yet been assessed in prospective clinical trials but may be used on an off-label basis. One particular medication that has been increasingly utilized for this purpose is Avastin, a drug that is approved for the intravenous treatment of colon cancer. Intraocular injections of Avastin have shown promising early results, and an excellent safety profile, in the control of retinal swelling and neovascularization due to a variety of retinal conditions. Avastin lasts about 6 weeks in the eye after a single injection and may need to be repeated if the disease reactivates. Although an injection into the eye sounds painful, it is simple to perform, relatively painless, and very well tolerated by patients.

There is no known medical treatment for retinal branch vein occlusion. Anti–coagulants such as heparin, coumadin, and aspirin have not been shown to be of value in preventing branch vein occlusion or managing its complications. Because anti–coagulants may be associated with systemic complications, they are prescribed only in specific clinical circumstances, for example for patients with known clotting abnormalities.

Patients who are looking for an experienced LASIK surgeon in Houston visit Eye Center of Texas for treatment with Dr. Wade and Dr. Mayo. Over the years, Drs. Wade and Mayo have built a reputation for excellence in vision correction. Some of the procedures they offer include Houston cataract surgery, glaucoma treatment and macular degeneration treatment.