Central serous chorioretinopathy is a retinal disorder which affects the macula. Essentially, it is an “idiopathic disorder” which means that the precise cause is unknown. Central serous is associated with an elevation (detachment) of the macula due to leakage of fluid from the circulation behind it (choroidal circulation). The leakage occurs through a defect in the tissue layer known as the retinal pigment epithelium. The retinal pigment epithelium is a single–celled layer that lies between the retina and the choroid. This tissue layer normally serves to prevent fluid from the choroidal circulation from leaking under the retina. In central serous, fluid equilibrium is disturbed leading to leakage beneath the retina which elevates it to produce a macular detachment which distorts vision.

Cross-section of the eye wall

The syndrome is much more common in men who represent 85–90% of the cases. The onset is usually between the ages of 25 and 45, although, occasionally, a younger patient may be diagnosed with this disease. Older patients will continue to have signs of central serous when they developed it as a younger person, but some of the classic or typical features will be modified by age–related changes.

Central serous patients, in general, tend to be slightly hyperopic (far–sighted) but not to have other eye diseases. The condition is more common in Caucasians, Hispanics, and Asians than in African–Americans who get this condition only rarely.

There has always been an impression that patients with central serous exhibit a characteristic personality. Patients have been observed to be energetic, dynamic, harried, pressured, and emotionally stressed. One of our earlier reports has identified the Type A Behavioral Pattern as a risk factor for the disease.

Patients usually present with a disturbance in central vision, either a gray zone or a blind spot in the central field or metamorphopsia which is waviness or undulation in the central portion of the vision. On clinical examination, the ophthalmologist may find one or more small blister–like elevations to the retinal pigment epithelium. In the acute stages, there is an overlying elevation of the neurosensory retina. Occasionally, patients who have detachments of the retina are asymptomatic, simply because the bubble of fluid does not involve the center of the macula or the foveal region. Signs of previous detachments of the retina can often be detected by the clinician. These are atrophic and pigmentary degenerative zones in the retina. When the neurosensory retina is elevated, it is displaced from its normal source of nutrition, the choroidal circulation. In time, the outer retina may become degenerated. Even when the macula resolves and is no longer detached, it does not function because of the degenerative change. (Thus, there is a rationale for reattaching the macula, if possible, see treatment below.)

Clinical photo of a patient with
central serous chorioretinopathy (CSC).

An important part of the diagnosis of central serous relies on the fluorescein angiogram. In the typical case, a leak can be demonstrated at the level of the retinal pigment epithelium as the fluorescein dye gradually passes into the subneurosensory retinal space. This is the hallmark angiographic feature of the disorder in its classic form. The leaks will vary, depending on the duration of the detachment and the nature of the fluid.

Some severe variants of the disease are seen in patients who have certain systemic diseases such as severe hypertension, collagen vascular disorders, blood dyscrasias, and organ transplant. The use of corticosteroids may also be a risk factor for central serous.

What treatments are available for central serous chorioretinopathy?

Treatment for most patients with CSC is usually not necessary since most cases resolve spontaneously within 3 to 4 months. Early treatment should be considered, however, for those people whose distortion, vision loss, and difficulty with depth perception make their daily activities such as reading and driving difficult. Treatment is also considered if visual symptoms remain for persistent central blisters.

A laser is an instrument that produces a pure, high-intensity beam of light energy. The laser light can be focused onto the retina, selectively treating the desired area while leaving the surrounding tissues untouched. The absorbed energy heats, or photocoagulates, the retina, creating a microscopic spot. 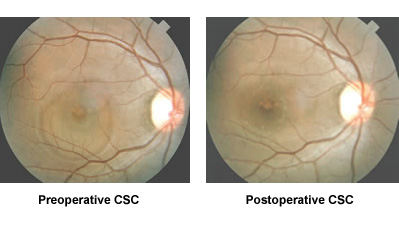 Laser surgery is performed in our office while you are awake and comfortable. The laser treatment usually takes less than 30 minutes to complete, and you can go home immediately following surgery. Arrangements for transportation should be made in advance since you may not be able to drive right away.

Photocoagulation decreases the duration of CSC by several months, although it appears to have little effect on the final vision or recurrence rate.

Photodynamic therapy, traditionally used for treating macular bleeding (choroidal neovascularization) in age-related macular degeneration and ocular histoplasmosis, has emerged as an effective treatment for some eyes with CSC. The outpatient procedure is painless and performed in our office. A special photodynamic dye is injected into an arm vein. Fifteen minutes later, a “cold” laser light is aimed at the choroidal neovascularization which selectively absorbs the dye. The laser light activates the dye, causing the production of a very active form of oxygen (singlet oxygen) that seals the leak. Patients can go home immediately following photodynamic therapy but must avoid direct sunlight for 2 days following treatment to avoid skin burns from the dye.

The prognosis for visual recovery in central serous is generally good. Usually, the pigment epithelial leaks close spontaneously and the detachment resolves over a period of weeks to months. Most patients (greater than 90%) will retain vision of 20/30 or better in the affected eye. Although many patients may manifest subtle clinical findings in the opposite eye, most patients (greater than 80%) do not develop bilateral symptoms. Despite good acuity, some of these patients may still note some mild permanent abnormalities in the vision of the affected eye such as decreased contrast, mild distortion, and decreased night vision. Reported recurrence rates are 20–30% although we have observed a higher rate among the patients referred to our group (perhaps a more severely affected group since we tend to be referred challenging cases). Weeks, months or even years later, new detachments may evolve. Each detachment runs the risk of further pigment epithelial and retinal damage. Some patients will experience progressive atrophy of the pigment epithelium and severe vision loss, which is permanent. Other patients may develop expanding detachments of the retina as fluid gravitates to detach the inferior retina.