What You Should Know About Flashes and Floaters

Floaters are seen as clouds or lines that seem to float in your field of vision. Flashes, which may be associated with floaters, appear as flickers of light. 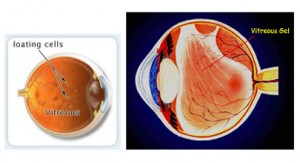 Although flashes and floaters are usually common and harmless, their sudden appearance can be a symptom of an eye hemorrhage or a retinal detachment. Early detection is critical in successfully treating these conditions. You should, therefore, have an emergency eye examination for sudden floaters or flashes in one eye.

Floaters are usually caused by condensations of the vitreous, the clear jelly-like fluid that fills the inside of your eye. Shrinking of the vitreous causes the gel to pull off of the eyewall, causing a posterior vitreous detachment (PVD). This is commonly age-related, but is also more common with nearsightedness, following trauma or surgery, or with inflammation inside the eye. Floaters can also be caused by bleeding into the vitreous (as in proliferative diabetic retinopathy and retinal vein occlusions) or with eye inflammations.

Although they appear to be in front of your eye, they are actually floating within the vitreous inside your eye. You may sometimes see small specks or clouds moving in your field of vision. They may have variable shapes, including small dots, cobwebs, clouds, or lines. They are often most noticeable when looking at a plain blue background, such as a computer screen or blue sky.

Flashes are often caused by the vitreous pulling on the retina during a posterior vitreous detachment or with the development of a retinal break or detachment. The flashes often develop just before floaters are seen. They usually are bright light-colored, occur in only one eye, and are without shape.

Migraines are another common cause of flashing lights. Some people experience flashes of light that appear as jagged, often colored, lines or “heat waves” in both eyes, often lasting 10-20 minutes. If a headache follows the flashes, it is called a migraine headache. However, jagged lines or “heat waves” can occur without a headache as part of an ophthalmic migraine. Migraines are often associated with light sensitivity, nausea, and tiredness.

Can flashes or floaters cause vision loss?

Sudden flashes or floaters can signify a retinal break or detachment which can cause blindness if left untreated. You should have an emergency eye examination for sudden floaters or flashes in one eye. However, for most, these symptoms are temporary, and not associated with any serious eye problems or permanent vision loss.

Although floaters are usually frightening and annoying when they first develop, they usually become much less noticeable within several weeks to months. The floaters can often be moved out of the way by moving your eyes around. Rarely, some will require a vitrectomy, a relatively painless outpatient surgery, to remove the vitreous for visually disabling floaters.

Occasionally, floaters and flashes can be an indication of a more serious problem than PVD. Other possible causes include retinal tears, retinal detachment, infection, inflammation, hemorrhage, and eye injury. Occasionally, flashes of light are caused by migraine headaches. When related to a headache, they usually appear in both eyes and last for 20-30 minutes before a headache starts.

Symptoms that may indicate a more serious problem

Surgery is not necessary for most patients with floaters or flashes. Often, floaters become less noticeable over time as they settle below the line of sight. If flashes and floaters are related to a problem other than a PVD, another form of surgery may be required.