Unlike a camera, the image obtained by the retina is not of uniform clarity or sharpness. Only the central portion of the retina, the macula, is sensitive enough to provide a high-quality vision for tasks such as reading, watching television, or driving. The macula is a very small area, with the central portion being only about the size of the head of a pin. It is only this specialized area of the retina, the macula, that is capable of the detailed vision necessary for many daily tasks.

In order to maintain its round structure, the central portion of the eye is filled with a jelly–like substance known as the vitreous. 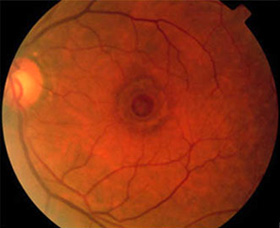 The hole is thought to be caused by the vitreous pulling on the central macula, creating a central defect in the retinal tissue. It usually occurs for no obvious reason (idiopathic), although a macular hole can also be caused by trauma or retinal detachment. Macular holes are most common in women in their 60′s and are not associated with any systemic medical problems. Approximately 10% of patients with a macular hole in one eye will eventually develop a macular hole in the other eye. This process results in a defect or dark spot in the central vision with distortion and central vision loss resulting.

Symptoms of a macular hole are common to most conditions affecting the central part of the retina. They include the following: decreased central vision for both dis

distance and reading activities, distortion in central vision, a small defect in the central vision where small letters may disappear. The diagnosis of a macular hole is made a dilated retinal examination and examines the back of the eye. A fluorescein angiogram (injection of a dye into the vein with photographs taken of the back of the eye) may be recommended to evaluate the situation and ensure that the macular hole is due to the vitreous traction as described above, and not secondary to other rare conditions in the back of the eye. OCT testing is probably the simplest test to diagnose and evaluate a macular hole as it will show a hole in the central macula.

Treatment for many patients with a macular hole is often not necessary since many remain asymptomatic. Surgery should be considered, however, for those people with a relatively new macular hole whose distortion, vision loss, or difficulty with depth perception make their daily activities such as reading and driving difficult.

Until recently, very little could be done to correct the visual deficit resulting from macular holes. As a result of the introduction of microsurgical techniques, it is now possible to offer a surgical procedure with the potential for some visual improvement. This procedure is known as a vitrectomy and involves the microscopic surgical removal of the vitreous jell within the center of the eye. Particular attention is paid to removing any of the vitreous attachments from the macula, thus releasing the traction or pulling on the retina which caused the macular hole initially. This permits settling of the retina against the wall of the eye.

In order to completely close the macular hole, and to have its maximal effect, the gas bubble must apply continued upward pressure against the retinal surface in the area of the macula. Because the macula is located in the back part of the eye, a patient’s head must remain in a “face–down” orientation to allow the air bubble to rise toward the back of the eye and exert this pressure. Patients must maintain this face–down position for approximately 2 weeks after surgery in order to achieve successful closure of the macular hole and maximize the chances for vision improvement. This face–down positioning is the single most critical portion of the procedure for closing macular holes. As a result, emphasis must be placed on the patient’s ability to cooperate with strict face–down position at all times for a period of approximately two to three weeks after surgery in order to achieve a successful outcome. 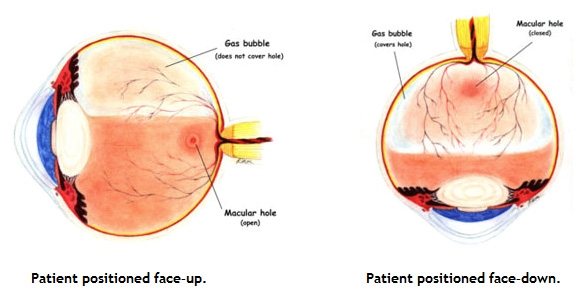 In order to increase the patient’s ability to comply with these instructions, numerous devices have been developed that assist the patient in maintaining this face–down position throughout the day and at night as well. Devices can be purchased or rented from a variety of companies that permit more comfortable positioning during sleep as well as allowing the patient to maintain a face–down position while eating and reading.

At the end of the 2–3 week period of strict face–down positioning, the patient is then permitted to resume a more normal upright posture. The gas bubble itself, however, may take anywhere from 6–8 weeks following surgery to completely disappear. The air bubble is gradually absorbed by the body, and the vitreous cavity is then filled with liquid produced by cells in the front of the eye. Importantly, patients who have a gas bubble in their eye cannot fly in an airplane and must stay at sea level. This is because at high altitudes the gas can expand and cause the eye pressure to go up to dangerous levels.

The surgical procedure itself is performed typically under local anesthesia and patients go home that same day. A postoperative examination within 24 hours of surgery is required in all cases. Regular follow–up examinations are performed during the first three weeks of recovery, to monitor for successful closure of the hole, observe for any potential complications, and to reinforce the importance of face–down positioning. Patients typically utilize several eye drops applied to the operated eye over the course of several weeks following the surgical procedure.

Approximately 6–8 weeks after surgery, when the bubble has completely absorbed, the patient is measured for glasses. Full visual recovery may not occur until as late as three months after the surgical procedure.
Vitrectomy successfully flattens the macular hole in over 75-90% of cases. With successful surgery, visual acuity usually improves by about 50% although it may take several years for the maximal vision to return.
As with all surgical procedures, there are potential complications or side–effects associated with the repair of the macula hole. These include a small percentage of patients who develop retinal tears or detachments during the surgical procedure itself, or in the immediate postoperative period. These problems are usually repairable.
In patients who have not already undergone cataract surgery, the development of a cataract occurs in almost all individuals within six months to two years. Surgical removal of the cataract and placement of an intraocular lens is then required.