A retinal artery occlusion occurs when the central retinal artery or one of the arteries that branch off of it becomes blocked. This blockage is usually caused by a tiny embolus (blood clot) in the bloodstream. The occlusion decreases the oxygen supply to the area of the retina (i.e., a retinal “stroke”) nourished by the affected artery, resulting in permanent vision loss.

The following conditions increase your risk of retinal artery occlusion:

Unfortunately, there is no treatment that can consistently restore vision lost from an artery occlusion. However, if the problem is caught within the first hour and treatment begins immediately, partial recovery may be occasionally possible.

A nevus is a flat, benign, pigmented area that may appear inside the eye or on its surface. Nevi commonly appear on the choroid, the iris, and the conjunctiva. They are similar to freckles and don’t typically change shape or grow.

Though most nevi are harmless, they should be monitored for changes. Your doctor may take photos or use ultrasound to document the size, shape, and other characteristics of the nevus. In rare cases, the nevus may be biopsied and examined for melanoma (cancer) cells. 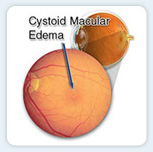 Cystoid macular edema (CME), or swelling of the macula, can occur as a result of disease, injury, or, occasionally, eye surgery. With CME, fluid collects within the layers of the macula, causing blurred, distorted central vision. Though this eye condition rarely causes a permanent loss of vision, recovery is often a slow, gradual process. Most patients recover in two to 15 months.

Many cases of CME can be treated with anti-inflammatory drops. Occasionally, medication is injected near the back of the eye for a more concentrated effect. Oral medications are sometimes prescribed to reduce swelling. 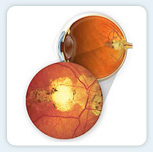 Histoplasmosis is caused by a fungus commonly found in the dust and soil of the Mississippi-Ohio River Valley region. About 62 percent of all adults living in this region are carriers of the syndrome. Men and women are equally affected.

Histoplasmosis is contracted by inhaling dust that carries the fungal spores. The effect of the syndrome on the body varies greatly from one person to another. Many carriers have no symptoms at all, while others experience flu-like symptoms and mild respiratory infections. People who already have a weakened immune system are more likely to be seriously affected by histoplasmosis.

The fungus can affect the eye by causing small areas of inflammation and scarring of the retina. These are called “histo spots” and can occur in both eyes. The effect of histo spots on vision depends on their location. Spots in the peripheral area of the retina may have little or no impact on vision, while those located in the center of the macula may cause prominent blind spots.

Often, ocular histoplasmosis does not require any treatment. If you are diagnosed with this condition, your doctor will probably recommend that you closely monitor your central vision with an Amsler grid. When the condition causes abnormal blood vessels to develop in the central retina, laser eye surgery may be used. In some cases, surgical removal of the tiny, abnormal vessels has been successful. 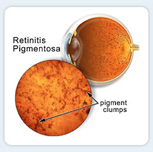 Retinitis pigmentosa (RP) is a rare, hereditary disease that causes the rod photoreceptors in the retina to gradually deteriorate. The rods are located at the edge of the retina and are responsible for peripheral and night vision.

People with RP usually first notice difficulty seeing in dim lighting and gradually lose peripheral vision. The effect this disease has on vision can range from mild problems to blindness.

RP affects males more than females. Though it is frequently diagnosed during childhood, some people do not have noticeable symptoms until later in life.

Currently, there is no standard retinitis pigmentosa treatment or therapy available to patients at our practice. However, Vitamin A palmitate has been found to slow down progression, and researchers are studying possible treatment options such as retinal implants and drug therapy. Work is also being done to isolate the genes that are responsible for the disease.

Stargardt’s disease (also known as fundus flavimaculatus) is a type of macular degeneration that typically surfaces before the age of 20. This disease is an inherited disorder that causes a progressive loss of central vision of both eyes but does not affect peripheral vision.

Stargardt’s is a progressive disease. Symptoms may be mild at first, but will usually worsen over time. Early symptoms include the following:

Unfortunately, there is no known cure for Stargardt’s.

Temporal arteritis, also known as giant cell arteritis, is an inflammatory condition that affects the medium-sized blood vessels that supply the head, eyes, and optic nerves. Patients with temporal arteritis experience swelling and tenderness in the blood vessel of the temple and scalp. The disease is most common in people over age 60 and affects women about four times more than it affects men. If allowed to progress, temporal arteritis can be sight threatening. Vision loss occurs when the inflamed arteries obstruct blood flow to the eyes and optic nerves. Temporal arteritis may also start to affect arteries in other areas of the body. Prompt treatment of this condition is essential to prevent permanent vision loss and other health problems.

Patients with temporal arteritis usually notice visual symptoms in one eye at first, but many notice symptoms in the fellow eye within days if the condition is untreated. The following are some of the most common warning signs of the condition:

The ophthalmologist often works in conjunction with the patient’s internist to treat this disease. The primary treatment is oral steroid medication to reduce inflammation. Most patients notice an improvement in their symptoms within several days of receiving treatment. In some cases, long-term steroid use is necessary.

Uveitis is a general term that refers to inflammation or swelling of the structures of the eye that are responsible for its blood supply. These structures are collectively known as the uveal tract and include the iris, ciliary body, and choroid. Uveitis is often caused by infection or underlying disease, but sometimes the cause is unknown. The condition usually affects people between 20 and 50 years of age.

There are four main categories of uveitis:

The appropriate treatment for uveitis is dependent on the severity of the disease and the ocular structures involved. Topical eye drops and/or oral medications may be prescribed to reduce inflammation. In some cases, medication is required to reduce intraocular pressure. After inflammation has subsided, treatment may be required for secondary conditions such as cataracts, glaucoma, or the presence of scar tissue.

Eye Center of Texas is an established eye care practice that is equipped with state-of-the-art technology to help patients obtain their best vision. Led by Dr. Wade and Dr. Mayo, the practice is frequently visited by patients searching for an experienced Houston cataract surgeon or LASIK surgeon. With five locations throughout Texas, the practice is a leader in refractive surgery throughout Houston, Pasadena, Clear Lake, Katy and Sugar Land, TX.