What You Should Know About Diabetic Retinopathy

If you have been diagnosed with diabetes and are afraid of losing your vision, you are not alone. Diabetes has many faces—it affects people of all ages, races, and nationalities. Of the almost 20 million people in the United States with diabetes, almost half of those will eventually develop some sort of diabetic eye disease. Diabetic retinopathy is the leading cause of new cases of legal blindness among working-age Americans.

Typically, changes begin to take place in the retina after a patient has been living with diabetes for 10 to 15 years.

Diabetic vision loss is often preventable with early detection and treatment. At the Eye Center of Texas, we specialize in all aspects of diabetic eye disease. The advanced diagnostic and treatment techniques we use often keep you seeing normally, allowing you to enjoy life to its fullest.

Diabetes mellitus is a disease causing the blood sugar (glucose) to become elevated. There are two basic kinds of diabetes. Type 1 diabetes is diagnosed early in life and requires insulin to bring the glucose level down to normal. Type 2 diabetes occurs later in life and can be controlled with diet, pills, or insulin, depending on its severity. Approximately 18 million Americans have diabetes, with over one-third of those affected being undiagnosed.

How does diabetes affect the eye?

Over time, diabetes primarily affects the blood vessels that nourish the retina. In the earliest phase of the disease, known as background or nonproliferative diabetic retinopathy, the retinal vessels work like a garden hose, bringing oxygen and other nutrients into and out of the eye. Diabetes causes them to sprout tiny leaks, or microaneurysms the arteries in the retina become weakened and leak, forming small, dot-like hemorrhages. These leaking vessels often lead to swelling or edema in the retina, which may result in decreased vision. Central vision can become blurred, just as a water droplet placed on a photograph will cause the picture to blister and become distorted.

Color retinal photograph demonstrating diabetic macular edema. The image is centered on the macula with the optic nerve seen on the right of the photo (right eye). The macula is swollen with fluid. There are white fatty deposits in the retina (exudates) which are frequently seen in such cases. 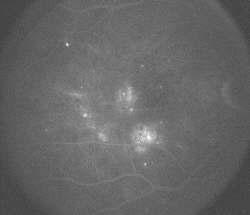 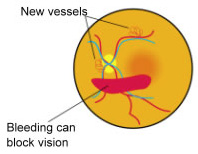 The next stage is known as proliferative diabetic retinopathy. In this stage, circulation problems lead to oxygen deprivation in some areas of the retina. New, fragile, blood vessels develop as the circulatory system attempts to maintain adequate oxygen levels within the retina. This is called neovascularization. These new vessels do not help the eye, however. They are fragile and can cause blindness by hemorrhaging or retinal detachment.

Who gets diabetic retinopathy?

Diabetic retinopathy develops gradually over many years. People with Type I diabetes, those requiring insulin to control their blood sugar, and patients with diabetes for many years are at an increased risk for developing retinal problems. Poor control of the blood glucose, pregnancy, uncontrolled high blood pressure, and smoking also aggravate diabetic retinopathy. Approximately 50% of diabetics (about 5 million Americans) will develop some form of diabetic retinopathy. Diabetic retinopathy is the leading cause of vision loss and new-onset blindness in the United States in those 20 to 74 years of age, with new cases of blindness developing in 12,000 to 24,000 persons annually. Remarkably, much of this vision loss is preventable with more timely diagnosis and treatment.

The effect of diabetic retinopathy on vision varies widely, depending on the stage of the disease. Some common symptoms of the disease are listed below:

Though the symptoms listed above can signal diabetic retinopathy, diabetes can cause various other eye symptoms as well. If you are diabetic and experiencing any type of vision problem, you should seek treatment from a doctor immediately. Many diabetic retinopathy patients are examined by an internist, endocrinologist or optometrist before they are referred to our retina specialists for treatment.

How is diabetic retinopathy diagnosed?

You can’t diagnose diabetic retinopathy by looking in the mirror since your eye will usually look and feel normal. Vision is also often normal despite the presence of potentially blinding eye conditions. Only a thorough retinal examination through a dilated pupil or in many instances through Optos screening camera can detect these problems. Properly timed laser treatment can effectively stabilize vision although it is less likely to improve it. The key to maintaining good eyesight, therefore, is early diagnosis and treatment before symptoms occur. Most diabetic patients dilated eye examinations at least once a year throughout their lifetime. Further testing, including photography and fluorescein angiography, may be done to assist in the diagnosis and treatment of any changes thought to cause visual loss. 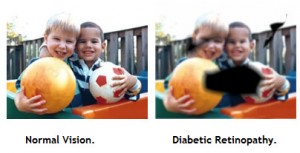 What treatments are available for diabetic retinopathy?

Good control of your blood sugar can significantly decrease the chances of diabetic retinopathy developing or progressing. However, there are some people who, despite eating right and controlling their diabetes as best as possible, will still get significant eye disease. Adequate blood pressure and dyslipidemia (” high cholesterol’) control also contribute to the severity of the retinal condition.

Laser photocoagulation is one of the main ways that diabetic retinopathy is treated. A laser is an instrument that produces a pure, high-intensity beam of light energy. The laser light can be focused onto the retina, selectively treating the desired area while leaving the surrounding tissues untouched. The absorbed energy heats, or photocoagulates, the retina, creating a microscopic spot.

Laser surgery is performed in our office while you are awake and comfortable. The laser treatment usually takes less than 30 minutes to complete, and you can go home immediately following surgery. Arrangements for transportation should be made in advance since you may not be able to drive right away.

It will take several weeks to months before we can tell whether the laser surgery has been successful. Since diabetes is a progressive disease, many patients need more than one treatment to control their eye problem and prevent further loss of vision.

To treat the abnormal growth of tiny blood vessels and bleeding that often result from diabetic retinopathy, we frequently use a type of laser surgery called pan-retinal photocoagulation (PRP). When performing this diabetic retinopathy treatment, the surgeon uses a laser to destroy oxygen-deprived retinal tissue outside of a patient’s central vision. This prevents further growth of fragile blood vessels and seals leaking ones, helping to stop the disease from progressing. Some patients will experience some generalized blurring of vision which is usually transient but may persist indefinitely. Since there are these side effects, panretinal photocoagulation should be performed only for specific indications which have been well established through clinical trials. Despite these side effects, when indicated, panretinal photocoagulation has been clearly shown to reduce the risk of severe visual loss in proliferative diabetic retinopathy. The tradeoff of this treatment is that it creates some blind spots in the patient’s peripheral vision and difficulty in night vision. 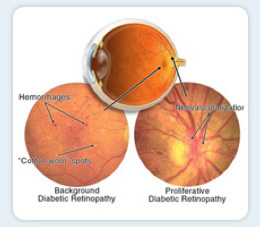 3 Intraocular steroids and other medications

Although laser photocoagulation was the only treatment available for diabetic macular edema since the 1970s, the recent advent of intraocular steroids has added another successful treatment for this disease. Injection of anti-inflammatory steroid medication (Kenalog) into the eye (a painless in-office procedure) appears to rapidly improve macular edema and vision loss, often more successfully than laser. However, the injections often have to be repeated every 4-6 months, and the long-term visual results remain to be determined. Temporarily increased eye pressure (glaucoma) and cataract is the most common and treatable side-effects. Pending ongoing studies, the role of laser photocoagulation versus intraocular steroids is still unclear. Studies are also ongoing evaluating devices that will allow for a long-term, sustained release of steroids into the eye.

Recently, the intraocular injection of anti–vasogenic drugs, that tell blood vessels to stop growing and leaking, has shown promising results in the control of retinal neovascularization and retinal edema. These treatments have not yet been assessed in prospective clinical trials for diabetic retinopathy but may be used on an off-label, non–approved basis.

One particular medication that has been increasingly utilized for this purpose is Avastin (bevacizumab), a drug that is approved for the intravenous treatment of colon cancer. Intraocular injections of Avastin have shown promising early results, and an excellent safety profile, in the control of retinal swelling and neovascularization due to a variety of retinal conditions including diabetes. Avastin lasts about 6 weeks in the eye after a single injection and the injection may need to be repeated if the disease reactivates.

Some patients with severe proliferative retinopathy will develop extensive bleeding or retinal detachment that can cause blindness. Vitrectomy surgery is done in the operating room, usually on an outpatient basis. These advanced microsurgical techniques often allow us to restore vision by removing the hemorrhage and bleeding tissues. Vitrectomy is also used for some eyes with macular edema that fail to respond to laser photocoagulation or intraocular steroids.

A vitrectomy is a common retinal surgery in which the vitreous gel is removed with the aid of tiny surgical instruments in the operating room. If scar tissue has accumulated on the retina, small instruments are used to peel the scar tissue off of the surface of the retina to relieve the traction. Once the blood is removed, a laser is usually added to the side part of the retina during the surgery. The goal of surgery for a traction retinal detachment is to try to stabilize the vision and decrease the chance of the vision worsening.

A vitrectomy is performed in the operating room while you are in a semi-sleep state and your eye is numb. The surgery takes about one to two hours and patients go home that night. The surgeon may place a gas bubble in the eye at the end of surgery to act as a splint to keep things in place as they heal. The gas bubble will be slowly absorbed by your body over several weeks. It is important to note that if a gas bubble is left in the eye patients cannot fly and must stay at sea level until the gas disappears. 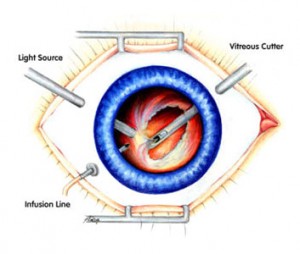 To minimize vision problems associated with diabetes, patients should:

Over the years, Eye Center of Texas has helped many patients regain their vision by providing state-of-the-art vision correction procedures. Dr. Wade and Dr. Mayo are LASIK surgeons Houston patients trust to provide the care they need for high-quality vision. In addition to performing laser eye surgery, the practice is a well-known cataract surgery Clear Lake facility and a provider of glaucoma treatment.