What You Should Know About Retinal Detachment

The retina is the neurosensory tissue that lines the back wall of the eye. Like the film in a camera, the retina is responsible for creating the images that one sees. The center of the retina is called the macula and is the only part capable of fine, detailed vision, i.e. reading, recognizing faces, etc.

When the retina detaches, it separates from the back wall of the eye and is removed from its blood supply and source of nutrition. The retina will degenerate and lose its ability to function if it remains detached. Central vision will be lost if the macula remains detached.

What are the common symptoms of retinal detachment?

What causes a retinal detachment?

There are three types of retinal detachments:

Who gets retinal detachment?

How is a retinal detachment diagnosed?

Anyone who has sudden flashes, floaters, or peripheral vision loss needs an urgent examination by an eye doctor familiar with retinal diseases. A careful dilated retinal examination is necessary to diagnose retinal breaks or detachment.

How are retinal breaks and detachment treated?

Once the retina separates from the eye-wall it must be surgically pushed back into place; the causative retinal breaks are then “glued” with laser photocoagulation or cryotherapy. There are several surgical options available for repairing a retinal detachment. Scleral buckling pushes the “wall against the wallpaper” whereas pneumatic retinopexy and vitrectomy push the “wallpaper against the wall.” Surgery is usually performed within a day or two of diagnosis, particularly if the macula and central vision are not yet affected.

This surgical procedure has been in use for more than 40 years, and, until approximately 25 years ago, was the only procedure available. It is still commonly used for rhegmatogenous retinal detachments, especially when there are no complicating factors. The procedure involves localizing the position of all the retinal breaks, treating all retinal breaks with the cryoprobe and supporting all the retinal breaks with a scleral buckle. The buckle is usually a piece of silicone sponge or solid silicone. The type and shape of the buckle vary depending on the location and number of retinal breaks. The buckle is sewn onto the outer wall of the eyeball (sclera) to create an indentation or buckle effect inside the eye. The buckle is positioned so that it pushes in on the retinal break and effectively closes the break. Once the break is closed, the fluid under the retina (subretinal fluid) will usually spontaneously resolve over 1–2 days. Sometimes the surgeon elects to drain the subretinal fluid at the time of surgery. Most often, a scleral buckle procedure can be done under local anesthesia and as same-day surgery (in and out of the hospital on the same day). Postoperatively, there are usually no positioning requirements and one can resume most activities within several days (except for anything that would jar the head).

Scleral buckling is an outpatient procedure performed in the operating room under local anesthesia. A piece of silicone rubber is permanently sewn to the outside of the eye, pushing (or “buckling”) eye wall (sclera) against the retinal breaks. The eye looks and feels normal following surgery. Scleral buckling successfully re-attaches in the retina in over 90% of eyes with one operation.

Since the 1980′s this has been a popular way to repair a straightforward rhegmatogenous retinal detachment, especially if there is a single break located in the superior portion of the retina. This procedure involves injecting a gas bubble into the middle part of the eye (vitreous cavity). It is then critical to position oneself so that the gas bubble covers the retinal break. If the break can be covered by the bubble, the subretinal fluid will usually resolve within 1–2 days. The retinal tear is either treated with cryopexy before the bubble is injected or with a laser after the retina has flattened. The main advantages of this approach are that it can be done in the office, thus avoiding hospitalization and that it avoids some of the complications of scleral buckling surgery, although it has its own set of complications. The main disadvantages are the requirement for precise head positioning for up to 7–10 days following the procedure and a slightly lower initial success rate as compared to a scleral buckle or TPPV. If the retina is not reattached by a pneumatic retinopexy procedure, a scleral buckle and/or TPPV can be done at that point. 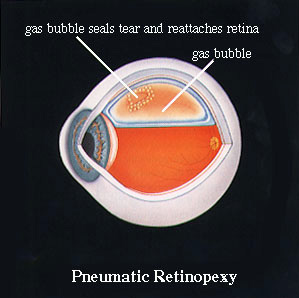 In this procedure, the retina surgeon numbs the eye with local anesthesia and injects a small gas bubble into the eye’s cavity. The bubble facilitates the repositioning of the retina back into its normal location and keeps the two detached layers up against each other. Because the gas rises, this treatment works best for detachments in the upper portion of the eye.
After a gas bubble is injected into the eye, the patient positions their head so the bubble floats up against the retinal detachment. Once the retina re-attaches, usually within several days, the causative retinal breaks are surrounded by laser photocoagulation or cryotherapy. The cryopexy can be performed before the injection of the gas bubble in many cases. Over a period of one to two weeks, the eye gradually absorbs the gas bubble.

Pneumatic retinopexy has a 75% success rate following placement of the initial bubble. Initial failures are primarily due to poor patient compliance with head positioning or the development of new retinal breaks. Subsequent surgery (i.e. scleral buckling or vitrectomy) is usually successful in re-attaching the retina.

Usually referred to as a Trans Pars Plana Vitrectomy (TPPV), this procedure was first used ˜25 years ago and has been continuously refined and improved since then. Over the last 5–10 years a TPPV procedure has become the initial surgery of choice for repair of many retinal detachments. The procedure involves making small incisions into the wall of the eye to allow the introduction of instruments into the vitreous cavity (the middle of the eyeball). The first part of the procedure usually is the removal of the vitreous using a vitreous cutter. Then, depending on the type and cause of the detachment, a variety of instruments (scissors, forceps, pics, lasers, etc…) and techniques (excision of tractional bands, air-fluid exchange, silicone oil fill, etc…) are used to reattach the retina. A TPPV can also usually be done as same-day surgery and with local anesthesia. It is sometimes important to maintain a specific head position after surgery to keep the retina attached. More information regarding vitrectomy surgery can be found on the vitrectomy page.

Vitrectomy is an outpatient surgery performed in the operating room under local anesthesia. The vitreous is removed, directly eliminating the retinal traction on the causative retinal breaks. Scar tissue growing over the retinal surface can be removed as well. The eye is then filled with a gas bubble. This mechanically pushes the retina back against the eye-wall. Laser photocoagulation or cryotherapy is then used to seal the retinal breaks. Vitrectomy surgery has a variable success rate (often more than 90%), depending on the severity of the retinal detachment.

In rare cases where other types of retinal detachment surgeries are either inappropriate or unsuccessful, silicone oil may be used to reattach the retina. The vitreous gel is removed and replaced with silicone oil, which presses the retina into place. While the oil is inside the eye, the vision is extremely poor. After the retina has resealed itself against the back of the eye, a second procedure may be performed to remove the oil.

Approximately 90% of rhegmatogenous detachments can be initially repaired with one or a combination of these procedures. Sometimes, a scleral buckle is combined with a TPPV. If the retina does not reattach or detaches again after initial reattachment, it is usually due to the development of scar tissue on the surface of the retina and tractional forces within the vitreous cavity. If this happens following a scleral buckle procedure, it is often necessary to do a TPPV to repair the detachment. Sometimes, an intraocular gas bubble can be injected and the retina reattached the following positioning. If a TPPV was done initially, it is often necessary to go back and do another TPPV to remove the new scar tissue and/or perform a scleral buckle. If a pneumatic retinopexy was the initial procedure, another pneumatic can be done or a scleral buckle or TPPV can be performed. As one can tell, there is no set way to repair a detachment and all the available procedures can be used in different combinations and sequences depending on the specific situation.

Patients usually need to have their glasses changed several months after retinal reattachment surgery, particularly following scleral buckling. Final vision may also be decreased by the later development of a cataract, which often follows vitrectomy surgery. Cataract surgery is often successful in restoring vision in such cases.

What you can do

Early detection is key in successfully treating retinal detachments and tears. Awareness of the quality of your vision in each eye is extremely important, especially if you are in a higher-risk group such as those who are nearsighted or diabetic. Compare the vision of your eyes daily by looking straight ahead and covering one eye and then the other.
Notify your doctor immediately if you notice any of the following:

Patients seeking LASIK surgery in Houston, TX can visit Eye Center of Texas to receive the latest treatments available. The practice is led by a team of experienced eye surgeons and optometrists, including Dr. Wade and Dr. Mayo, who are dedicated to helping patients see their best. Some of the patients they treat include Sugar Land cataracts, glaucoma and PRK patients.